I came across this passage today which my father, the Jack London scholar in my family, had sent to me a couple of years ago. Both my dad and I grew up very near the old Jack London ranch in Glen Ellen, California and my dad is a docent at the state park there now, often leading silent meditative hikes for folks wanting to connect with the place in a deeper way.

This passage comes from John Barleycorn, an autobiographical novel focused on themes of drinking, alcoholism, and masculinity (published 1913).

“Wander with me through one mood of the myriad moods of sadness into which one is plunged by John Barleycorn. I ride out over my beautiful ranch. Between my legs is a beautiful horse. The air is wine. The grapes on a score of rolling hills are red with autumn flame. Across Sonoma Mountain wisps of sea fog are stealing. The afternoon sun smoulders in the drowsy sky. I have everything to make me glad I am alive. I am filled with dreams and mysteries. I am all sun and air and sparkle. I am vitalised, organic. I move, I have the power of movement, I command movement of the live thing I bestride. I am possessed with the pomps of being, and know proud passions and inspirations. I have ten thousand august connotations. I am a king in the kingdom of sense, and trample the face of the uncomplaining dust…. And yet, with jaundiced eye I gaze upon all the beauty and wonder about me, and with jaundiced brain consider the pitiful figure I cut in this world that endured so long without me and that will again endure without me. I remember the men who broke their hearts and their backs over this stubborn soil that now belongs to me. As if anything imperishable could belong to the perishable! These men passed. I, too, shall pass. These men toiled, and cleared, and planted, gazed with aching eyes, while they rested their labour-stiffened bodies on these same sunrises and sunsets, at the autumn glory of the grape, and at the fog-wisps stealing across the mountain. And they are gone. And I know that I, too, shall some day, and soon, be gone.”

Jack London, who was born with a Jupiter-Saturn-Pluto T-square (also in a grand cross with Uranus and possibly his Moon –– the birth time of 2pm has a Rodden Rating of B), likely wrote John Barleycorn during the year of 1912 when Saturn was transiting conjunct his natal Pluto, opposite his natal Jupiter; and Pluto was transiting trine his natal Saturn. Saturn and Pluto were, at that time, tightening into the August 1913-June 1916 conjunction which would coincide with the first world war. 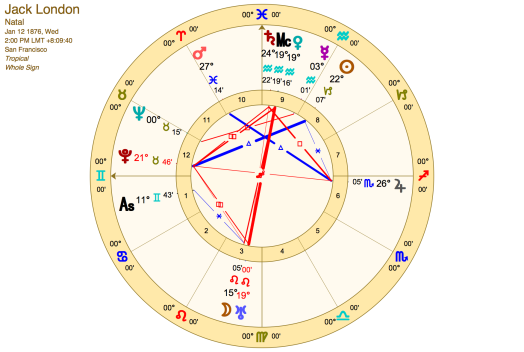 John Barleycorn itself is an old folk ballad from the British Isles which chronicles the life cycle of barley as it is grown, harvested, and made into alcohol. The great Scottish poet Robert Burns published his version of John Barleycorn in 1782 while a Jupiter-Saturn conjunction made multiple passes conjunct his natal Pluto. 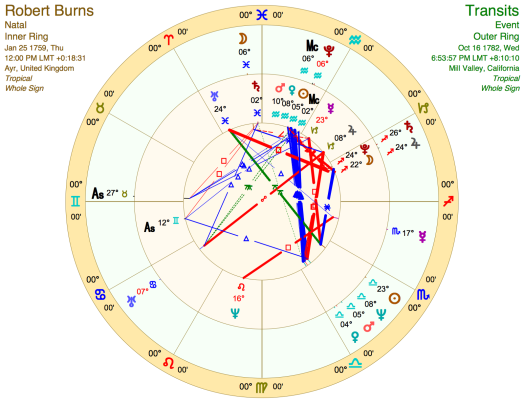 In Burns’ version John Barleycorn is buried and reborn (Pluto’s themes of passage to and from the underworld may be seen here), and then in the Autumn the reapers come with their scythes (here we see the common Saturnian image of the reaper with his scythe who rings in death at the harvest). John Barleycorn of course, is made into alcohol which gives courage and joy (Jupiter) but not without the taste of death, as we can see from London’s both buoyant (Jupiter) and bleak (Saturn) reckoning with it in the passage above.

There was three kings into the east,
Three kings both great and high,
And they hae sworn a solemn oath
John Barleycorn should die.

They took a plough and plough’d him down,
Put clods upon his head,
And they hae sworn a solemn oath
John Barleycorn was dead.

But the cheerful Spring came kindly on,
And show’rs began to fall;
John Barleycorn got up again,
And sore surpris’d them all.

The sultry suns of Summer came,
And he grew thick and strong;
His head weel arm’d wi’ pointed spears,
That no one should him wrong.

The sober Autumn enter’d mild,
When he grew wan and pale;
His bending joints and drooping head
Show’d he began to fail.

His colour sicken’d more and more,
He faded into age;
And then his enemies began
To show their deadly rage.

They’ve taen a weapon, long and sharp,
And cut him by the knee;
Then tied him fast upon a cart,
Like a rogue for forgerie.

They laid him down upon his back,
And cudgell’d him full sore;
They hung him up before the storm,
And turned him o’er and o’er.

They filled up a darksome pit
With water to the brim;
They heaved in John Barleycorn,
There let him sink or swim.

They laid him out upon the floor,
To work him farther woe;
And still, as signs of life appear’d,
They toss’d him to and fro.

They wasted, o’er a scorching flame,
The marrow of his bones;
But a miller us’d him worst of all,
For he crush’d him between two stones.

And they hae taen his very heart’s blood,
And drank it round and round;
And still the more and more they drank,
Their joy did more abound.

John Barleycorn was a hero bold,
Of noble enterprise;
For if you do but taste his blood,
‘Twill make your courage rise.

‘Twill make a man forget his woe;
‘Twill heighten all his joy;
‘Twill make the widow’s heart to sing,
Tho’ the tear were in her eye.

Then let us toast John Barleycorn,
Each man a glass in hand;
And may his great posterity
Ne’er fail in old Scotland!